The city is still full of political statements. What you see is a showcase from the Arctic graffiti-archive established in Y2K - courtesy of and copyright of Jakub Christensen M. All photos by author, except "Anaat taanuk" and full version "Ind- ud" of Knud Rasmussen - both by the artist know as John Doe & .... The timeline is constructed in following (narrative) order:

Colonial times: examples of street art found at the New Hernnhut station/later Univ. of Greenland. 1876 ship images and tags by Agparât a.k.a. Abraham. The flag is from the old center of Nuuk, right in the heart of the city, which only makes it a shocking sight for your eyes.

Urban guerrilla: in no way referring to the 1973 song by UK rock group Hawkind; this set of street art reflects the urban environment as a message-board, in particular cases as a local/extrovert "do with the past" -> in terms of the Norwegian/Danish priest Hans Egede claiming "sorry" to his fellow nuummiut ?!*. Followed by 9/11 contrast of "sorry", asking the public about the colonial in a sharp edged question. Or it's all about money, money, money - "Fight oligarchy" it states surrounded by devils/monkeys(?). That's when it gets political? Again, motives from the productions of John Doe & ...

Making our way through: the image of a hunter shooting danish chicken, the stencil stating "me" and a almost Tom Waits message from a father to his son; "I love you son. Father". This set of images reverts the whole story of political street art into a question of reflecting within ourselves; in space and everyday life.

Posted by Jakub Christensen M, PhD at 12:07 PM No comments:

Nuuk York, Nuuk York – Dreams of the Future, Amnesia of the Past. Way back in 2006, under the label of Re-thinking Nordic Colonialism, many thought things got rollin' (read more more)

Today, 2013, just a few hours ago, a brand new party shed its light into the Arctic darkness. Parti Nordlys - Party Auroral. Fresh, consistent political kick off & kick in to present Inatsisartut election. Inatsisartut - Greenland's parliament is under election due March the 12th..only, will they make it.

Party Auroral - a party for all of Greenland and the rest of the world, has posted their preliminary agenda on their brand new page https://www.facebook.com/partinordlys . Time is running, so go get the message!

"WE LUBRICATE THICK ON" and the philosophical "BEHIND EVERY CLOSED DOOR, THERE IS A KEY" 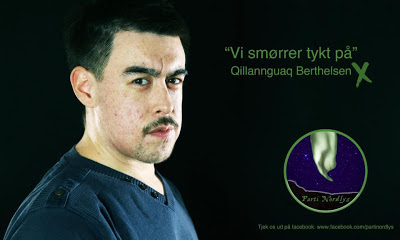 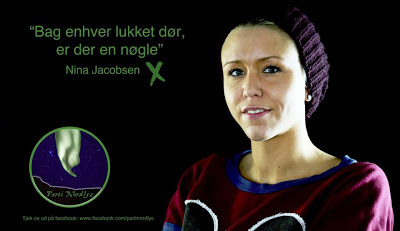