As a big thank you to u all for following, here’s … totally bias….
.. a top 10 list of this year’s mind blowing, yet tip of the iceberg, issues concerning talented Arctic ….


10) let’s start here; there is a lot commin’ out, there is still a big chunk of works which deserve publicity. I don’t know if it’s Marc Fussing Rosbach the ITwizard from Ilulissat, or Uummat – Polar Punk Rock from Uummannaq we should watch out for or…… So number 10 goes to ALL CREATIVE PPL IN THE ARCTIC, be it in sports, arts, business, social stuff etc. Let’s conclude here – this is a message for the media – go get the stories out!

9) goes to “NORDAFAR – A DIALOGUE” -  it’s an 18 minute art film shot and produced in Greenland in 2010 by Mikisoq H. Lynge and Martin Mørck. It´s a journey through an abandoned fishing settlement Nordafar in Greenland, 100 kilometers south of the capital Nuuk. 63.42°N, 51.34°E. The film explores a visual dialogue between man-made structures and the force of nature. All footage was shot on location during from july 2010 to may 2011. Music and sound was also recorded on location - http://vimeo.com/49671462 One has to respectonize the ongoing push in mediating the Arctic visionscapes.

7) goes to GREENLAND EYES FILM FESTIVAL – basically because they pulled it off. A festival like this should be fun in CPH. http://greenlandeyes.com/ that’s it.

6) goes to JESSIE KLEEMANN for nowness. It’s the performance design, the temporality, the book, the travelling entourage, the whole package and breaking the waves…which no one would have thought would get to you. Thus no words can describe – go see it, go read it, go and participate. http://youtu.be/gFqjJK6EbNo

5) goes to the PR machine of MADS PIHL/DESTINATION ARCTIC CIRCLE.  Two friends went on an epic winter adventure in Greenland and explored the Ice Cap, dogsledding, snowmobiling, heliskiing, traditional Inuit hunting life, and urban culture along the Arctic Circle. http://www.arcticcircle.gl/roughrealremote  Join them as they document the journey and share the love for all things Greenland in videos, photos, and field notes from their adventure. …. And get ready for 2013 http://vimeo.com/55279243

4) goes to MADELEINE REDFERN (Iqaluit, Nunavut) for communicating across and along in new media. Former Mayor at City of Iqaluit, now Consultant at Ajungi Arctic Consulting Group, Mrs. Redfern is a fantastic source of knowledge and momentum in real time as well as in cyberspace. Follow https://twitter.com/madinuk & http://pinterest.com/madinuk/

3) goes as well to the Inuktitut side of the Arctic – NU SCHOOL DESIGN (Iqaluit, Nunavut). Spanning from graffiti arts, community projects etc. etc. etc… www.nuschool.ca Please, come and do a workshop in Greenland….please, please, please….

2) second best – TUMIT PRODUCTION had a lot to prove this year and has a LOT to prove next year. Founded in 2009, I’m not saying to much; how ‘bout Tumit getting into co-productions across the Baffin Bay and man, ain’t it time to do some co-production with them creative ppl in Sisimiut? www.tumit.gl We’ll see.

1) SMALL TIME GIANTS – yes, basically because they have it all. The whole package. The real thing.  https://itunes.apple.com/dk/album/six-shades-of-heart-ep/id503560060?l=da I mean, which creative collective sends out solid material for 24 dkk?, goes all in at any concert at any place u can think of and on top of that, puts brain into their communication strategy. What I’m saying is, we can all learn from these giants how to create and deliver a product in a modern world ++++++ http://www.smalltimegiants.com/

Posted by Jakub Christensen M, PhD at 7:00 AM No comments:

November 29th, 2012 the Greenlandic lifestyle magazine ANU UNA gives u a point of view behind the scene re this years Christmas Calender by Tumit Production.

U can order this issue her: http://www.anuuna.gl/bestil/ 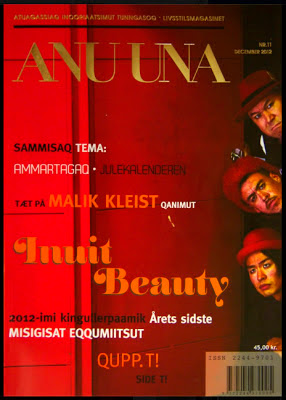 NISSIT ANGAKUAATILLU i.e. 24 chapters! will be screened on KNR TV.


Posted by Jakub Christensen M, PhD at 5:12 PM No comments:

QAQQAT ALANNGUI, Greenlandic horror movie by Tumit Production, directed by Malik Kleist, is out in Greenland.

Posted by Jakub Christensen M, PhD at 5:00 PM No comments:

a little bit of TUMIT time.... go www.tumit.gl and begin the journey "Good for You" ..


Posted by Jakub Christensen M, PhD at 4:06 PM No comments:

I'm glad that I can squeeze in the talented Arctic. Very glad about the Iqaluit based NUSCHOOL DESIGN AGENCY giving me the permission to show the spraycan masterpieces from Nunavut (urban centres and hamlets). So, at this venue, you can expect to see both the history of spraycan art in the Arctic and contemporary art interconnecting with community based organisations such as Habitat for Humanity Iqaluit (HFHIQ). 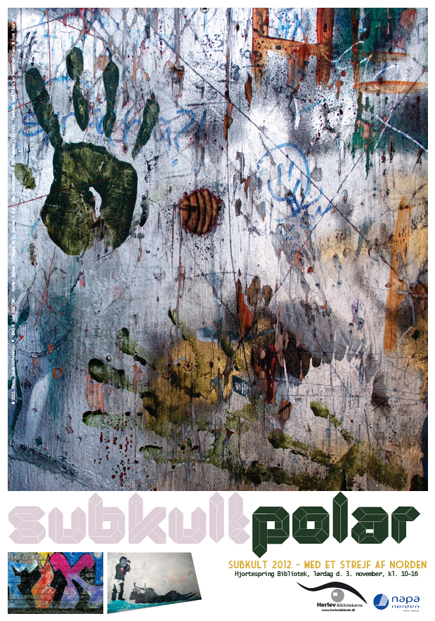 Posted by Jakub Christensen M, PhD at 10:40 AM No comments:

I'm celebrating 12y anniv. with exploring Arctic Street Art by offering guided tour in Nuuk - september 16th or 23rd. I shall announce AND confirm date, time and place through http://twitter.com/77jcm

Following is a rough selection of my collection from Greenland. Don't forget that Nunavut, Nunavik and the rest of the circumpolar region is also skilled. Search my blog by typing e.g. nuschool ...

P.S.
Unfortunatelly, I´m not able to participate @ The First International Conference on Urbanisation in the Arctic taking place in Nuuk, Greenland, 28-30 August 2012.
For those who care -  here's my contribution to the idea of urbanity in the Arctic.
Keywords: youth, Lefebvre - rhythmanalysis and moments (from the (given) real to the possible), differentiated space, talented Arctic, skills, visions and creativity.

English article from an institutional space in Sisimiut about youth accentuating important aspects of urban self-reflection.

Danish PhD thesis on the topic of Youth and Urbanity in Greenland (in danish with english resumé). One of the few works including a rhythmanalysis, in this case a rhythmanalysis of a skateboarding session and of the thesis' 10 casestudies. Intensity, seen as an essential rhythm of young people’s engagement with urban settings, is argued to affect both the energy and willpower of the young people to the whole community. Finally, there is a particular rhythm found in the data, namely in the youth activities accentuation of how action reinforces the path to success - new openings and opportunities in terms of the future, yet unknown city.

Posted by Jakub Christensen M, PhD at 8:04 AM No comments:

Nanowhalers & ... the Father of Dubstep Greenland

Yes, it's out there. Go get it and enjoy.
This is Nanowhalers by Uyarakq
http://itunes.apple.com/dk/album/nanowhalers-ep/id553350472 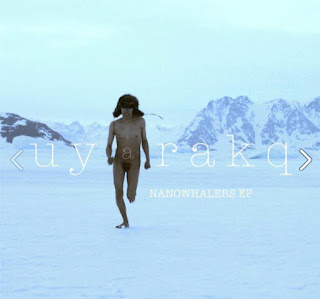 
Posted by Jakub Christensen M, PhD at 5:26 PM No comments:

THE TOWN, THE TALENTED, THE BOWL & WHAT'S ALL ABOUT 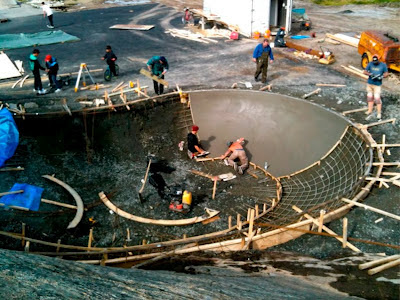 Sisimiut SK8-team & Project CEO Natalia Genét (DK) has joined forces with them British Colombia Canadians Jesse Boswell and Trevor Moncaster: prof. skatepark builders! Building "by the board" since August the 3rd, the Greenland Bowl is def. taking shape. On the side line the artist Steen Olsen (KN) & Mads Pihl (KN); who all sum it up with their photographic works e.g. http://500px.com/photo/9304703
Not to forget to mention SANILIN - the local Technical School who by far made it happen in terms of hardware. And I could go on... 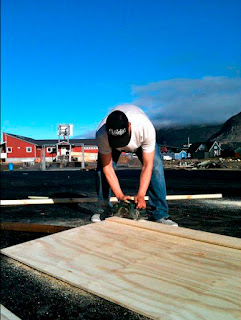 In the headlines sk8 & talented Greenland representative Nukaaka Berthelsen (KN). Apart from being a sk8 instructor, Nukaaka is one the local "maligassaq" - meaning "role model" in greenlandic. He's almost finished his education at RAL - Royal Arctic Line and full of sportsmanship. Gifted, very gifted snowboarder and teacher. If Kaaga from Ilulissat tough me how to stand on a snowboard in 2004, then Nukaaka made me appretiate the whole idea of it + the board in general (during 2006 and 2007). I'm not good, but thanks to him I understand the meaning of it (danish tekst on that topic available here: chapter 5.3 & 5.4).


Many may think of a no-go; imagining a skateboarding fascility in Sisimiut? Actually, yes. It seems to be there! Many did allready before I asked J & N in 2007. As I learned, there was a plan for a skatepark already in 2004 designed by J. So, 8y later, it's happening. Although time is an factor here, don't forget that the municipality and the Technical School always supported the sport. Partners for the NGO SKATEFOUNDATION GREENLAND lists both local, national and international forces. No matter what - this/THE new bowl is a landmark of the local youth linguo. Something I take the liberty to sum with help in the words of a English anthropologist Tim Ingold on "Lines" (2007:170); WHEREVER YOU ARE, THERE'S SOMEWHERE FURTHER U CAN GO. 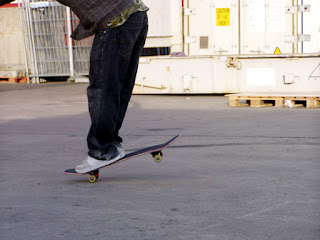 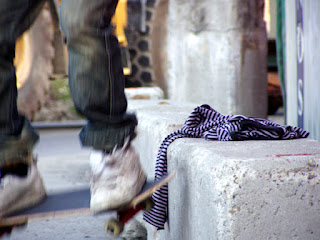 Posted by Jakub Christensen M, PhD at 6:45 AM No comments:

This one's the update worth while waiting for. STG - Small Time Giants, Tumit Production video shoot 2012. Listen and interpret. For those who care, follow Small Time Giants http://www.smalltimegiants.com/
Posted by Jakub Christensen M, PhD at 7:02 PM No comments:


I'm off to Berlin in a few. Excited to learn if Tikeq Qiterleq Mikileraq Eqeqqoq (2008) has arrived. Anyways, people should see this without English subtitles! Proud to be a presenter of Ujarneq Fleischers work. Tried to put him in as much as possible i.e. you'll see some stuff at the symposium + www.twitter.com/77jcm

It's all on Friday the 27th. It's going to be a Sisimiut Friday after all....

Posted by Jakub Christensen M, PhD at 9:02 AM No comments: 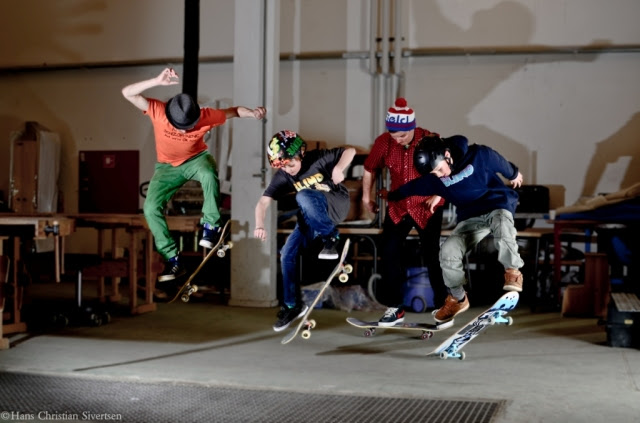 Posted by Jakub Christensen M, PhD at 7:51 AM No comments: 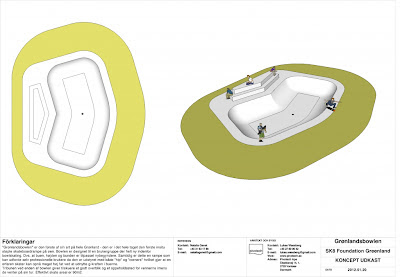 Today, 1st stage of URBANGREENLAND - do it yourself project by Nathalia Genét, landed in Sisimiut. God knows what her schedule is. One thing is there for sure - the logistics, the meetings and lines are about to get planned alive & the hell out.

I've been involved in this project from the beginning, behind the scenes which suites me fine at the moment; considering the importance of a whole bunch of other things screaming from behind. Nevertheless, it's a pleasure to see this finally happening and I hope it will do all the way! Otherwise ;-).

Well, let's get back to my intentions. Here's (above) the goal of the Urban Greenland - do it yourselfs project - THE BOWL by SK8 FOUNDATION GREENLAND.

Posted by Jakub Christensen M, PhD at 4:39 PM No comments: 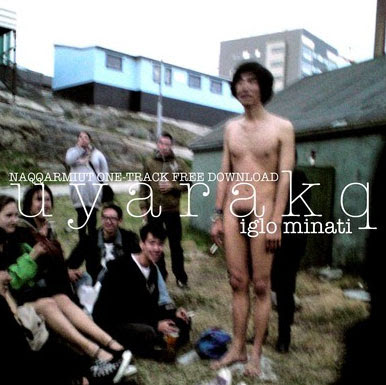 In the meantime, @this moment, so much love & happening ... at the music scene in #talentedGREENLAND

Check them all out: the man behind (him)itself UYARAKQ.

Posted by Jakub Christensen M, PhD at 2:47 PM No comments: 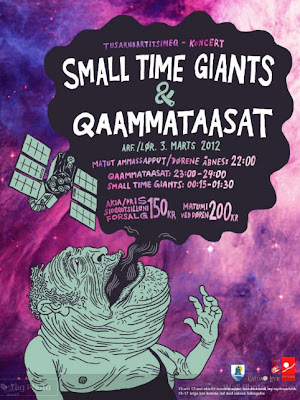 ...until everything cooles off; after a stunning Small Time Giants performance in Nuuk (https://www.facebook.com/smalltimegiants)...let's not forget the artist behind this piece: Martin Brandt Hansen. Come on KATUAQ - how 'bout that for an exhibition?

Posted by Jakub Christensen M, PhD at 6:09 PM No comments:


© All Right Reserved. Copyright & courtesy of jakub christensen m.
I did a similar walk in 2008. Here they're (some old school '88) during summer time ... http://blogforyouthstudies.blogspot.com/2008/09/old-school-graf-1980s.html
Posted by Jakub Christensen M, PhD at 9:07 PM No comments:

"... No doubt that it’s going to be an intense and a different week. I’m looking forward to see the films. On a personal level, it’s very interesting for me to bring Berlin, Greenland and cinema together. I’m aiming at interplay and an eye-opener for the audience. ..." in Berlin 24.-30.April 2012.
Read full interview with Director and Film Festival Coordinator Ivalo Frank -
Posted by Jakub Christensen M, PhD at 3:55 PM No comments:

HAPPY NEW 2012 & watch out for QAAMMATAASSAT

THIS IS QAAMMATAASSAT
Indie Rock from Nuuk
Follow the trail www.qaammataasat.gl

Video filmed by Josef Kajangmat except shaman scenes by Laila Hansen and Kunuunnguaq Iversen.
Happy New Year - Happy Mitaartut
And so it goes. Stay tuned for my interview with Ivalo Frank/Greenland Eyes IFF
Aiming at Monday the 9th of January.
Hot coffee commin'

Posted by Jakub Christensen M, PhD at 5:00 AM No comments: