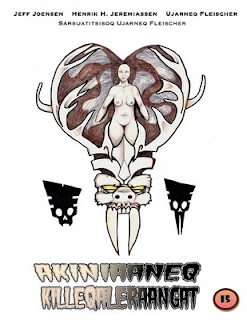 Abstract: Last year's war between Pisiffik and Brugsen suddenly becomes a personal affair for the employees. Brugsen has lost the battle and revenge gets worse and worse. Dan (leading role) comes to Sisimiut from Sarfannguaq to work for Pisiffik with his friends. Immediately, Siiva from Brugsen discovers that Dan has come to town and wants revenge - he carries an USB proving what really happend during the last war. To avoid the police, Dan tries to penetrate the police office. The mission fails, Dan gets arrested. To save him, friends give him a false ID by hacking into the Self-Governmet database. Isaac (Director of Pisiffik) knows a lawyer, who also is an alcoholic and lives in Assaqutaq. The lawyer is the only one who can free him in court............

While "Nuummioq" is on his way to Sundance Festival in Utah, Copenhagen has the chance to experience "HINNARIK SINNATTUNILU (Henry's Dream)". This is NOT Nick Cave's seventh album with The Bad Seeds (released in 1992), this is a Greenlandic movie (comedy) about a bohemian (or not) who strives for a better and easier life in the capital of Greenland, Nuuk. One day he receives a call from a friend & ......


Posted by Jakub Christensen M, PhD at 6:42 AM No comments: