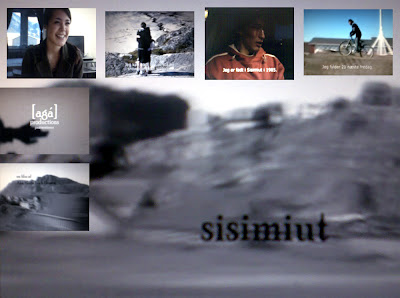 sisimiut - the short movie by Aka Maria Koch Hansen is a portrait of 2 young people from Sisimiut.
Uiloq is a young lady who studies at the Technical School, Sanilin. She spends most of here time with school homework, here boyfriend and leisure activities such as snowboarding. Aqqalunnguaq is a young man who dreams about becoming a bicycle repairer. Bicycling means a whole lot to Aqqalunnguaq. He spends most of his time bicycling or if the weather is bad at the Youth Club Nutaraq. In this short movie we encounter Uioloq and Aqqalunnguaq talking about their present and future in and out Sisimiut. In between their monologues both participants are portrayed during selected activities in the town.

sisimiut - the movie - is produced as part of my Ph.d. research project "Youth and the City– investigating urban youth culture in Sisimiut, Greenland: visions, skills and creativity" funded by Danish Research Council and part of "Urban Greenland - movements, narratives and creativity (2006-2009)."
Material for the 13 min. portrait of 2 young people from Sisimiut spans over 6 hours. It was recorded on a Sony HandyCam during august 2006. In my research I have access to all the raw data and permission for using the movie in public. Both participants gave also permission for viewing the movie in public. This will eventually take place through the local TV (Sisimiut TV) and KNR after an agreement between Aka, myself, the participants and the TV stations. The viewing will be non-commercial and probably take place during september 2007.
In terms of research, the process in making the movie and the final product are solely based on involvement of young sisimiormiut and their families. My personal involvement in this projects covers support in terms of motivation, logistics and my general research objectives, such as getting data about youth culture without little interference as possible.

hello from Almada Portugal
Have a nice day