Extract from presentation given at 15th Inuit Studies Conference (26-28.10. Paris) on "orality."

In my paper in I presented a few thoughts on the relevance of orality in the study of the city.

........"First of all, speaking of orality makes me automatically think of narratives. Narratives - simply meaning a story or an account of a series of events. But, and most importantly, narratives can also be understood as SPATIAL EXPERIENCES. The theoretical approach including the importance of narratives in studies of the city is for this conference occasion inspired by a Danish professor in Social and Cultural Geography, Kirsten Simonsen. In her book „ The multifarious city – on the construction of the city in practice and narratives (my translation)“ Simonsen not only elaborates on international discussions on globalization, transnational networks and effect of these tendencies on modern urban life. She also fleshes-out the deterministic views of globalization theories which tend to overlook the diversity of the temporary city life. For Simonsen the city is not only a place. The city is everywhere - all over us, so to say. Therefore she looks at the city as a complex, non-hierarchical, multy-scaled construct within a multiplicity of spatial and time based processes. Two French theorists, Henry Lefebvre and Michel de Certeau, play an important role in understanding the everyday life in the city. Lefebvre’s RHYTHMANALYSIS reveals new understandings of the diversity of city action. Rhythms reveal the city in bodily, socially, material and symbolic sense. But there seems to be a problem. Although RHYTHMANALYSIS helps in understanding movements and practice of the people who occupy the city, it does not provide us with any tools for analyzing the construction/understanding of the space people occupy. In search of tools for analyzing the perspectives of active, gendered body-subjects, who in time and space create the environment they live in, professor Simonsen introduces Certeau's claims for spatial relations in narratives. Certeau claims that every story (narrative) is a travel story – and therefore A SPATIAL EXPERIENCE - meaning that narratives stimulate and constitute cognitive thinking, more specifically cognitive maps, which according to Certeau are close to the temporality of everyday life. With this in mind, it is then possible to argue that narratives do make places attentive for individuals. In this sense, narratives promote also the establishment of trust and security. Even though narratives call upon memories and imagination, they organize so to say the invisible meanings of the city. In analyzing urban living, narratives therefore play an important role. They are creators of social practices and meanings, within their own time span (memories, expectations and time based ordering) and spatiality (places, routes and territories.) It is in my opinion necessary to include RHYTHMANALYSIS as a PARADIGM for explaining the continuous spatial production of the city. Nevertheless, it is NARRATIVESS who provide us with DISCOURSIVE subjectivity of the urban experience. "

The point of departure is:

Objectives: my PhD project investigates how youth in Greenland use and understand urban settings. The overall objective is to describe and analyse movements and creativity in the second largest city of Greenland, Sisimiut. Additionally, this project discusses how knowledge and skills, embedded in the local youth culture, may be connected with ideas implemented in the newest school statutory instrument Atuarfitsialak.

Methods: primary research will be conducted both during the school year and school holidays; it will consist of fieldwork undertaken over a period of six months and will be divided into four parts. Each part will take place during each of the four seasons of the year. The focus of the research will be on youth between the ages of 15 and 24. Additionally, a number of individual informants will be followed continuously. Apart from fieldwork in schools, the assembly hall, youth clubs and sport associations, the project will organise a creative workshop with young people to discuss their works on their urban lifestyle. The works, produced within the framework of the project, are to be presented in an exhibition at Sisimiut Museum. 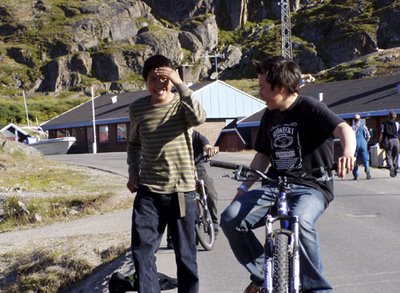 Posted by Jakub Christensen M, PhD at 5:08 PM No comments: