Declaration on Climate Change from Youth of the Arctic

Found this on the website of Arctic Youth Network (a grassroots organization that works to connect young Northerners to the opportunities around them, to their communities, and to the policies that affect their daily lives.)

...if you protect the Arctic, you protect the world!
...we're willing to make a difference and challenge you to do the same...
INVOLVEMENT OF YOUTH = COMMUNITY GROWTH
posted on YouTube July 26, 2007

Posted by Jakub Christensen M, PhD at 9:52 AM No comments:

.... the work end engagement of different generations. From the perspective of new media. From my work with youth in Sisimiut I see many paralels - interest, skills, visions, creativity, strong-willed youth.

Posted by Jakub Christensen M, PhD at 4:33 AM No comments:

I've just turned in my article for the IPSSAS proceedings (5th IPSSAS - in Copenhagen; theme. urban living.) The article is not accepted yet. Here are some tid bits from the text.

Title: Conceptions of space - the smoking place, a view from a skidoo & playgrounds in Sisimiut.

Abstract: This paper should be seen as a first step towards my PhD. dissertation, based on investigations conducted among young people in Sisimiut, Greenland. The questions raised in this paper are concerned with a multifaceted use and understanding of urban places in present day Greenland and discussed in relation to social theory on space.

Introduction
My PhD project investigates how youth in Greenland use and understand urban settings. The overall aim is to describe and analyse movements and creativity in the second biggest town of Greenland, Sisimiut. Moreover, in my dissertation I would like to discuss how knowledge and skills embedded in the local youth culture can connect with ideas implemented in the newest school statutory instrument Atuarfitsialak (the good school).
In my present approach to conceptions of space among young people in Sisimiut, I concentrate on presenting some of my fieldwork data, specifically a number of technology reports about leisure, produced by students at the local Technical School. Furthermore, in this text I would like to engage in the investigation of meanings of socio-spatial issues, such as the interaction between young people and urban environment. Elaborating upon the concept of space will hopefully clarify my approach to implementing collected data in a theoretical framework, currently under construction.
In this text, it is assumed that one of the most fundamental goals of every society is to create and instil in young people the knowledge and skills required for active participation. Greenland is by no means an exception. It is also assumed that young people in Greenland enjoy the mix and qualities of both traditional and modern life and diversities of cultural and political meanings. Finally, it is assumed that Sisimiut is a city, even though it only has 6000 citizens. As any other urban setting, Sisimiut encompasses decisive social networks, politics of space, architectural forms, and historical monuments, all intertwined and expressed in the fragmented modern reality.
All assumptions stated above are based on my project data collected during 6 month of field work during 2006 and 2007 (and additionally confirmed during several stays in Greenland in connection with earlier field work or employment.)

Methodology
Leisure - a theme for a technology project
The smoking place

A view from a skidoo
Ivalu Lynge Rasmussen presents space in Sisimiut from the point of view of a skidoo. Ivalu’s project is called; “Project about leisure’s best friend and nature’s worst enemy – the skidoo! (2007)” In her report, Ivalu presents different aspects of riding a skidoo in Sisimiut. In a contrast to Jens and Nicki’s report (on the smoking shelter at school), Ivalu’s work results in a protective mask, securing healthy and enjoyable movement in and around Sisimiut.
Riding a skidoo during winter time is the most preferred leisure activity for Ivalu, her boyfriend and his family, whom she calls a skidoo family. Every time Ivalu is out on a ride she takes her digital camera and takes pictures of frolicking Greenlanders on skidoos, the nature, mountains and views over the sea. On her skidoo trips, Ivalu learned about suffering from frostbite on chin and nose. To avoid frostbite, Ivalu explains that one can wear a mask, which many people have bought but choose not to wear anyway, because available masks make it difficult to breathe through. In order to solve this problem, Ivalu produced a comfortable, breathable mask. The mask sample is made out of wind proof garment and fleece, designed in a girlie look. Unfortunately, Ivalu didn’t have the time to try out her product since her report was produced during spring and temperatures where already rising that time. Actually, I suspect, that Ivalu’s main purpose in choosing her topic wasn’t exactly driven by anticipating a revolution in accessories for skidoos, but more likely by a desire to elaborate on the role of skidoos in reaching different places around Sisimiut. She loves what she does and the front page of her report stand alone gives the reader a hint about what to expect. Most of her report is actually about different spatial activities using skidoos. “What do you get out of riding a skidoo in your spare time?”,” The technique of a lethal jumps”, ”Photo series from skidoo trips by nature’s paparazzi,” fill up most of Ivalu’s report. 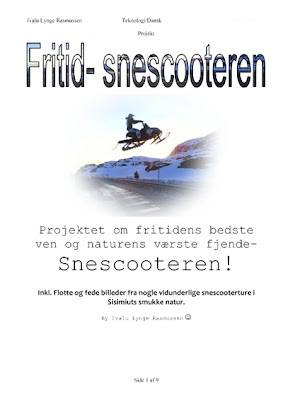 Let us now concentrate on the perception of space in Ivalu’s stories. Ivalu takes us to different places in Sisimiut. She makes her first point about the ability to reach remote places on a skidoo. You can reach Kangerlussuaq by skidoo, the traffic hub of Greenland, the glacier Aqqukitsoq; “and many other places, which by the way got their names such as Bottleneck, Highway, Playground, Family Mountain, Qooroorsuaq and many more (ibid.:3).” She also points out that many young people love to show off by jumping over the road e.g. 5km from the city. In this case, Ivalu describes what the machine can accomplish in jumping over the road. In her scrupulous description of a freestyle technique Ivalu connects specific space with ideas of style. Later, in her photo series, she presents a variety of views available by riding a skidoo on top of the mountains. The skidoo takes e.g. Ivalu up to 1400 meters from where she can see the glacier Aqqutikitsoq and from where her friends plan a downhill ride never done before. The photo series is mainly about what one can accomplish with the machine but the images also tell a story about an important feature of Sisimiut countryside – namely the mountains. Ivalu's image descriptions exemplify localities mentioned earlier (Bottleneck, Qooroorsuaq etc.). When I think about my other informants, they also refer to the mountain scenery as well, when I ask about their opinion about Sisimiut, its potentials, and differences from other cities in Greenland. Additionally, Ivalu’s perception of space is in my opinion a result of her personal orientation. In her report we learn about specific space from a young women’s perspective, emphasizing her aspirations of winter and the countryside.
Ivalu’s report is in my opinion a useful example in presenting young people’s perception of space in Sisimiut. Ivalu’s narratives about skidoo activities around Sisimiut is most importantly a significant contribution to understanding space interconnected with ideas of lifestyles. Perceptions of space vary in Sisimiut, as do lifestyles. Nevertheless, many things indicate that perceptions of space and lifestyles relate to each other. In Ivalu’s report, narrating space interconnects with Ivalu’s personal preferences. To put it the other way around, Ivalu’s lifestyle constitutes features of narrating space in her report.

Space: in the context of personal narratives

Posted by Jakub Christensen M, PhD at 5:37 AM No comments: