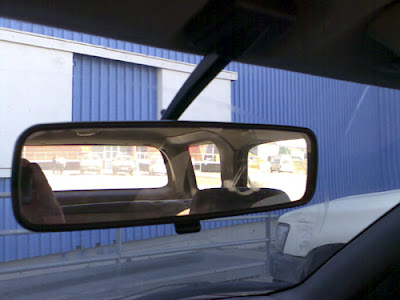 Chain smoking in Kangerlussuaq
I knew that I had a lot of time in Kangerlussuaq. This was due to the price for my plane ticket. Nevertheless, I spent 8 hours in the airport.

Graffiti mountain
During my waiting in the airport I decided to go on a short trip to Kangerlussuaq harbour. About 10 km by cab. I spent 1 hour walking around, mostly filming and photographing a hill filled with graffiti. Personal (like Kilroy was here) and many with relations to ships anchoring at Kangerlussuaq. 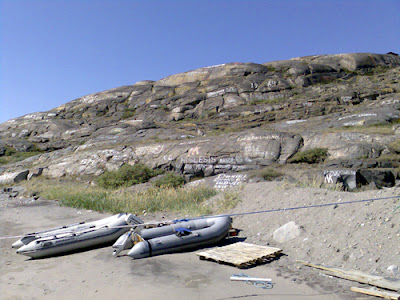 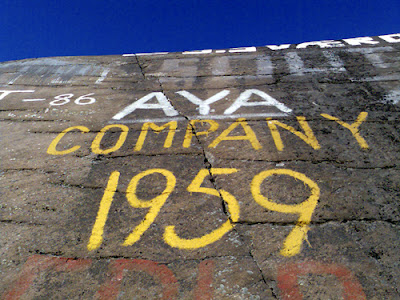 The fog brought me to Nuuk
When I finally boarded the plane, I expected to be in Sisimiut after 30 minutes. I haven't imagined that we would not be able to land. The weather was nice in Kangerlussuaq. But foggy, very foggy in Sisimiut. The captain of our plain couldn't simply get visual of the city. After circulating 2 times around the town the crew decided to bring us to Nuuk - which was actually on schedule. So, after 1,5 hour in the air, I landed in Nuuk and collected a voucher for a double bedroom at HHE - Hotel Hans Egede. The bizarre thing about this trip was the fact that few of the passengers on the same plane had actually left Nuuk earlier that day.

In Sisimiut on july the 3rd
Next day, early in the morning we finally left for Sisimiut. This time we skipped Maniitsoq because of thick fog. Nevertheless we had the chance to re-visit Kangerlussuaq. All in all, at 11.30 I made my way through town to the dormitory office and got keys for my room. I'm staying at the dormitory block H as last year. The only difference is that I now occupy the room number 31, exactly opposite my room from the winter.

Meetings, walks and talks
I spent my first week getting in shape after my long journey. From the beginning I knew I have to be quick about meeting my contacts, since some of them are on their way for holiday.
Sisimiut is somehow quiet. The dormitory is almost dead. Weather wise its perfect. Lots of sun.
I have spent a lot of time at the Youth club, making arrangements for next week. Either I go with people to set up a camp up north or to the hamlet Assaqutaq. The second place involves painting work and moving material from the city. Hopefully things get moving during the first days of next week.
I've already made a trip with youth to finish a painting job at a new playground at Teleøen. I've rented a car and helped transport people. Meetings this week included Youth Club, Nature Guide and my informants. I'm still working on getting in contact with people involved in the movie which I need to show them (the move was shot last year by Aka Maria Hansen - it is a 13 min. portrait of one young lady and one young boy.) The movie will be available some time in the future online. Probably when I get it in the local TV (September?).
Yesterday I went hiking with 2 guys around the fjord. Getting a lot of mosquito hustle, but eventually having a good day of this and that while climbing up and down the hill. 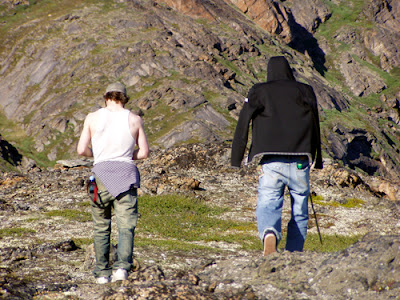 Being back in town
- there is a lot of activity during the evening and night, mostly youth driving around in cars or bicycling
- many new faces at the Youth Club
- interesting project coming up with the Qajaq Club (presently in Ilulissat participating at GM National Championship
- many people have left, stopped, moving
- the town is somehow empty, quiet
- lot of construction work going on 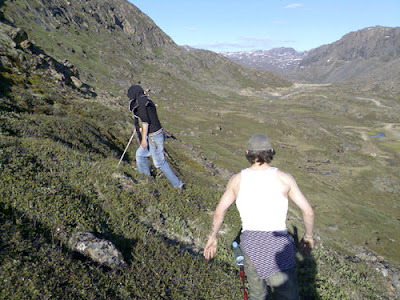 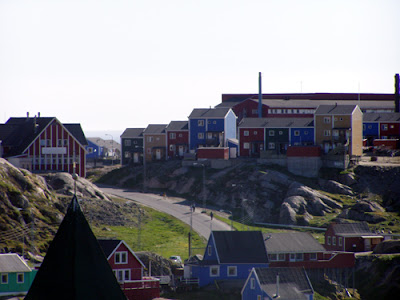 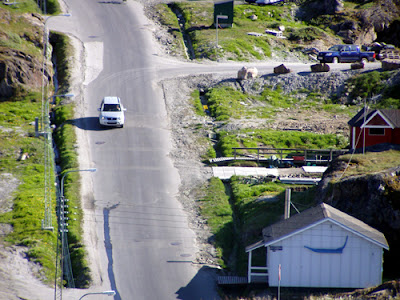 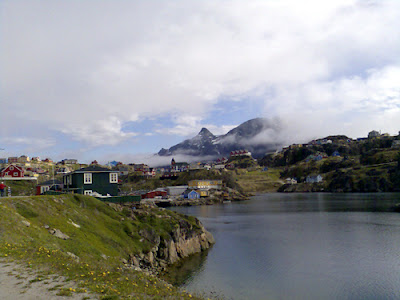 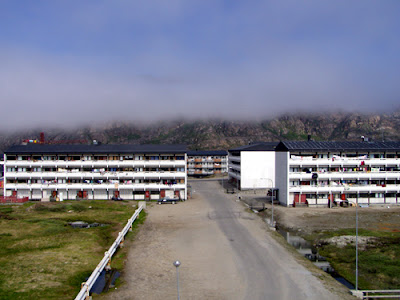 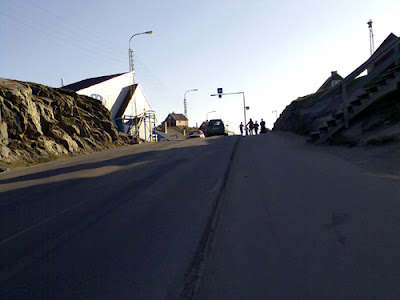